Taking a Leap of Faith with Fringe.

In this past season of Fringe, the fans of the show have been asked to take a leap of faith as the series re-spun itself into a new timeline.  Now that the season has come to its conclusion I would like to know if you all thought it was worth it.

We all know Peter was removed from the time line only to be re-inserted into a world where no one knew who he was (except for Olivia eventually, and we’ll get to that shortly).  Was it worth it to you all for Peter to be transported to this strange new land?  Did you feel it betrayed the earlier narrative of the previous three seasons?  Or, are happy no matter what Fringe does to itself as long as the series continues?

Here are a few more “gripes” that are worthy of examination.

These are just a few of the head-scratchers we were presented with this year.  There are many things to be thankful for and many other things that Fringe did well.  So if you are fine with all of the aforementioned than please tell me so and share your thoughts with the rest of the community.

If some or all of these things don’t sit well with you then by all means tell us how you feel also.

Freedom of speech no matter what time-line, universe or dimension! 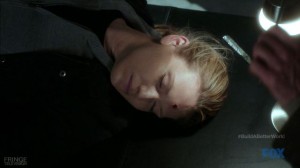 (The above GIF comes from the tumblr page, “Observer Totalitarianism” visit it here.)