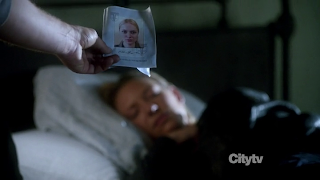 How Peter & Olivia Got Their Grief On
~~~

“Those who cannot remember the past are condemned to repeat it”

There has never been a series like Fringe that has so consistently blown my mind and expectations.

The beauty of those moments is when they happen, those moments totally shock and engross.  Yet upon reflection they make total sense and ring true to all that has come before.

With 4 plus seasons of character history an episode like this carries so many additional layers of emotional/dramatic texture and weight.  Many things can be intimated without being directly referenced.  Just seeing Walter listening to Olivia and Peter’s conversation is all the leverage Fringe fans need to imbue that conversation with the inherited emotional memories of the Walter/Peter backstory along with the Peter/Olivia/young Etta backstory.

It is that tip of the iceberg viewing engagement that a running serialized TV series can invoke.  Such a powerful tool.  ‘An Origin Story,’ was rife with many moments like this.  So when Peter heads along a similar path – like Walter who in this timeline has lost Peter twice as a boy – but with a revenge bent, it truly feels organic.

Walter offering Olivia another video tape so she and Peter can remember what they once had is another such moment.  The pain that such a journey entails is one we empathize for Peter and Olivia having to face.  As well as remembering how hard that journey has been for Walter.

It is also magnificent how Fringe reuses story points like Amber and video tapes for different purposes.  In Season 5 the videotapes provide not only the hope to the big picture problem of the Observer Occupation but a birthday videotape that Walter took provides the hope for the resolution of the small and deeply personal relationships of the main characters.  Wonderful writing.

To see Peter – in a powerhouse performance by Joshua Jackson – marshalling all his talents and faculties to try and sabotage the Observers wormhole shipping lanes, only to witness his efforts swept aside like the waving off of an annoying fly, is tragic.  To have his efforts turned aside and have the Observer tell him, ‘You don’t even know what you don’t know,’ causes Peter to snap.  That failure turns Peter’s optimism to despair and makes us able to empathize with Peter’s act of violence and insertion of the Observer mind needle into himself.

Episode ‘Patterns’: Add your own in the comments.

As Peter’s grief has him falling down a path of desperation and destruction there is the quiet counterbalance of Olivia’s journey of grief the second time around in dealing with the loss of Etta.  In a wonderful speech given by Walter to her, we see Olivia chose a different path this time.  Rather than building walls, she has the inner strength to take that last shred of will she is holding onto to face the legacy of pain left behind in the absence of Etta’s departure.

It is the very notion of being missed by others that the Observer cannot comprehend which powers Olivia to move beyond that pain of loss.  Rather than burying her grief she is trying to reach out to Peter and recapture what they had.  What they have lost.  The love for one another.

What adds to tragedy of the situation is that Peter held the choice Olivia has made, in his hands.  The moment when he compared the picture of Etta to Olivia.

It is my belief that the good emotions that Olivia is embracing will be what saves Peter from the dark ones he has succumbed to.  Peter is now is danger of becoming the enemy he despises.  Peter is in danger of literally losing himself in the world of cool, detached Observers.

The question is what price will have to be paid in the remaining episodes to save Peter and the world.