With this being the last season of Fringe there is an impediment for me to the stories that the show should be telling as it’s life cycle is coming to a close.  I want the stories to focus on the main cast and have it doing so by involving them directly in the main story.

So when the first two episodes set up a scenario where the show seemed poised to break out of paralleling Case Of The Week stories and have the main cast directly involved in treasure hunts for Walter’s Beta tapes; my expectations were very high for the third episode.  But, ‘The Recordist,’ fell back into the mystery of the week, that was not much of a mystery, and shifted the focus from the main cast to the guest stars.

Yes there is still the need to introduce new characters that come and leave the show when their purpose has been served, usually within one episode.  But they should be in support of the main cast and not taking center stage.  Last season in the very same third episode, Fringe introduced us to an intelligent fungus by the name of Gus.  Which was the weakest episode of Season 4. The Recordist may very well end up in that slot for the final season.  Fringe and plant based stories do not seem to make for the most compelling episodes.

Not that the scenes between the Recordist and his son totally rubbed the wrong way. Quite the opposite.  On my second watch of the episode I was much more taken in by the emotions and themes expressed between the two characters.  But the problem is, as mentioned off the top, Fringe already has a great father and son dynamic to work with.  The Peter and Walter dynamic has been one of the constant treats of the show.  And they have covered the same thematic ground and in much greater detail.

Outside of the main story there were some wonderful moments between the main cast members.  The scene between Olivia and Peter triggered by Olivia’s supposed inability to remember the name of the restaurant with the great apple pie was great.  Peter seemed so much like his father as he reminisced about food seemingly oblivious to Olivia’s inexplicable memory lapse.

Fringe went a bit meta introducing comic books of their adventures.  Some of the books were based on their real adventures and others were original ones written by the young Bark boy, River. Which was pretty cool.

Episode ‘Patterns’: Add your own in the comments.

With the clock counting down there is an unrealistic expectation on my part that every episode be a home run.  Perhaps if this episode is a foreshadowing of events to be played out at the series conclusion, it may gain some dramatic weight. But in a shortened season of 13 episodes this seemed to be an unneeded repetition of father/son dynamics and exploration of what separates heroes from cowards.

Still between the scenes between Peter and Olivia, the Fringe team captured in comic books, Walter’s bong habits and his mismanagement of the tapes, seeing that Gene is still around, the Olivia/Etta scenes, and Astrid’s tape recovery/laser skills; ‘The Recordist,’ managed to capture some great memories. 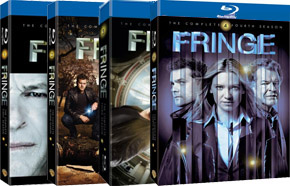