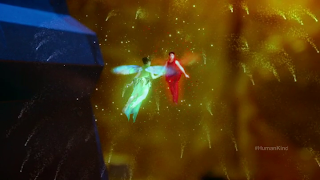 Walter to Carla Warren  - “I wanted to cry for you. But I’m different now.”

I went to my pad

And I crashed on my bed

I kept taking that snuff

Until it blew my head

It was really gunpowder

I a flash in the pan

I a charcoaled cinder

As a nod to previous seasons where the nineteenth episode were always something outside the lines, even for Fringe, Episode 9 was given that honor in this shortened final season.  Less ambitious this time, no doubt due to a decreased budget, Walter’s discovery of an excellent batch of LSD – Black Blotter –  still made for a compelling, inner mind episode.

What the episode lacked in resources it made up for in creativity as the Black Blotter acid trip allowed us to get inside Walter’s head and see the demons he is wrestling with. Threads from previous episodes spanning the series were also called back into play such as Walter’s fear expressed earlier with Nina that love is not enough to overcome all obstacles.

How well the idea of the struggle between Walter and the, ‘Walter That Was,’ worked for you hinges on whether you feel you know both versions of Walter.  I have seen complaints that because the show has played with alternate timelines and realities that in this version we have never seen the, ‘Walter That Was.’

This is not an issue for me because of several factors.  The timeline divergence did not take place until September allowed Peter to drown.  So all the events prior to that contain the same history from the first three seasons where the, ‘Walter That Was,’ existed.  We have had confirmation of this, this season from Nina and now in this episode where we learn that Carla Warren’s fate was also the same.

Reducing it further and taking the timeline/reality situations out of it, Fringe has shown that the core of these characters remains unchanged no matter where or when they existed.  So while the deck of character cards can be shuffled up and a few of them end up being dropped or replaced with others; these characters are essentially the same.  In the spectrum of things that the show has asked us to suspend our disbelief, this is certainly not at the top of my list.  Quite the opposite.  Such a concept is appealing and yes it is also dramatically convenient.  But it is a convenience I accept with no qualms.

The alternative is to draw an arbitrary line and say we have not seen the, ‘Walter That Was,’ in this reality and therefore I cannot empathize with Walter’s current situation.  This is an arbitrary stance  when viewed against the themes that the show has established over the course of its run.

Episode ‘Patterns’: Add your own in the comments:

Walter’s desperate attempt to recover his memories about the plan is a disaster.  At the end of this episode, he seemingly has remembered nothing of it. Instead he has unleashed all his other memories and accentuated his fears about becoming the, ‘Walter That Was.’

Beyond the Carla Warren callback, this episode called across other timelines to give us moments where Sam Weiss – perhaps still a bowling alley manager – died as a Resistance Fighter.  It also gave us the Observer Boy – named Michael and more.  For Michael remembers Olivia across timelines.  The handing off of Michael by the island couple – Richard and Caroline – made for one of those powerful moments that Fringe crafts so beautifully.  No words were needed or used but the poignancy was palpable as was the empathy coming from the Fringe team members – especially Olivia and Peter.

It is most gratifying to see the show to acknowledge these different realities and not ignore them.  The show has not shied away from making reality references throughout this season. They are an integral part of the show’s DNA and like the character arcs, it would be great to see some form of closure through further explanation given to them.  Chances are all these realities will play a part in the conclusion of the series.  There is a possibility of an end run around the conflicts in place by doing a reality reset but I have faith in the showrunners that they will not do so.  Quite the opposite.  I believe they will use those concepts to craft a superior ending to the series.

In the superb sequence using the Terry Gilliam animation style, Walter was able to face the, ‘Walter That Was,’ in order to retrieve the knowledge that gives him the password.  How will Walter handle this moment that must be coming when the climax of the season arrives?